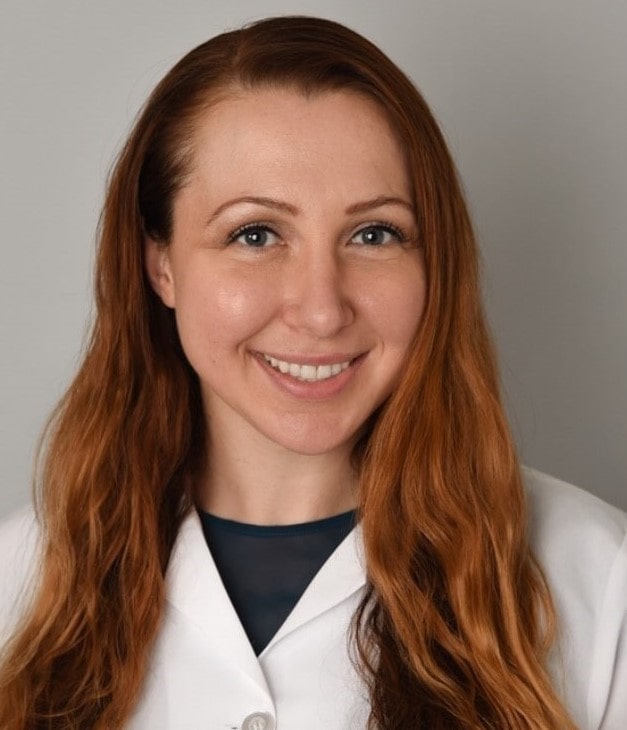 Emanuela Sofroni, MD is a Board-Certified Neurologist specialized in Clinical Neurophysiology, meaning she is proficient in performing EEGs (electroencephalograms) and nerve conduction studies/EMGs (electromyograms). Much like the EKG showing the electrical activity of the heart, an EEG reveals the electrical activity of the brain and may be utilized for a variety of conditions such as epilepsy and altered mental status in the hospital setting. Nerve conduction studies and EMGs may be used to diagnose peripheral nerve disorders and muscle diseases. She has also received special training in headache, including providing Botox injections for migraine prevention and other indications, including EMG-guided Botox for the treatment of spasticity. She is extremely passionate about treating strokes in an acute and subacute setting and enjoys participating in research studies in various regards within the field of Neurology.

On a Personal Note

Being a physician was in her blood. Dr. Sofroni’s grandmother had told stories of a young Dr. Sofroni bandaging the family dogs as a toddler and playing doctor as a child in Romania. When she was 12 years old, her father developed hydrocephalus and required an emergency surgery to place a shunt to drain the excess brain fluid; this saved his life. Learning about the brain surgery at such a young age initially sparked her interest in Neuroscience; this ultimately evolved into a lifelong passion. Besides providing patient care in the role of a physician, Dr. Sofroni has also been on the other side of treatment table. Last year a beloved family member had a devastating stroke, requiring thrombectomy to retrieve a large blood clot from a major artery in the brain. Dr. Sofroni can definitely relate to the anguish family members may feel in that type of medical emergency and the toll it can take for continued long-term care of a debilitated loved one. She has been through the gamut now that her loved one had ultimately succumbed to that devastating stroke and has come out on the other side with more thorough perspective and appreciation.

Only the Best Training

Dr. Sofroni has lived all over the country attaining her education and specialized training, starting with her undergraduate education at UCLA as a Neuroscience major. She had achieved many accolades including serving as the president of the UCLA Neuroscience Undergraduate Society. After graduating, she worked as an EMT and has some very interesting stories to tell about a few of the 911 calls she participated on. While working as an EMT, she applied to med schools and had chosen to attend Albany Medical College in New York for her medical education. There, she had graduated with the highest honors in Neurology, and had been inducted into the national Gold Humanism Honor Society (which demonstrates her compassionate care), among her many other awards. During her residency training at Kaiser Permanente in Los Angeles, the stroke program there had been one of the first to achieve the highest-level stroke accreditation at the time. She had elected to pursue her Fellowship training in Clinical Neurophysiology at the University of Illinois at Chicago. What made this particular fellowship program so prestigious was the equally weighted training in both EEGs and EMGs; it was like two fellowships crammed into one intense year, rendering Dr. Sofroni proficient in both techniques. After her training, she worked at Kaiser Permanente in Bakersfield before moving to Orange County to work at Healthcare Partners (now Optum) in Huntington Beach, CA. Dr. Sofroni is excited to begin the next chapter in her journey in San Fernando Valley where she has joined Vascular Neurology of Southern California.

One of the Best

One patient had said it perfectly, “Dr. Sofroni is one of the BEST NEUROLOGISTS I’ve had. She cares about her Patients. I will forever be very thankful for the time I had Dr. Sofroni as my Neurologist”.

Dr. Sofroni is proud to offer the best evidence-based practice with the most compassionate care to all her patients. She is eager to serve the community of West Hills Hospital and Los Robles Hospital.  Schedule a consultation with Dr. Sofroni today!